back to playlist
location on Google Map

Pompano Beach /ˌpɒmpənoʊ ˈbiːtʃ/ is a city in Broward County, Florida, United States, along the coast of the Atlantic Ocean just to the north of Fort Lauderdale. The nearby Hillsboro Inlet forms part of the Atlantic Intracoastal Waterway. As of the 2010 census the city's population was 99,845, with an estimated population of 102,984 as of 2012. It is part of the Miami Metropolitan Area, which was home to 5,564,635 people at the 2010 census.

Pompano Beach is currently in the middle of a redevelopment process to revitalize its beachfront and historic downtown. The city has also been listed as one of the top real estate markets, being featured in CNN, Money and the Wall Street Journal as one of the country's top vacation home markets. Pompano Beach Airpark, located within the city, is the home of the Goodyear Blimp Spirit of Innovation.

Its name is derived from the Florida pompano (Trachinotus carolinus), a fish found off the Atlantic coast.

There had been scattered settlers in the area from at least the mid-1880s, but the first documented permanent residents of the Pompano area were George Butler and Frank Sheene and their families, who arrived in 1896 as railway employees. The first train arrived in the small Pompano settlement on February 22, 1896. It is said that Sheene gave the community its name after jotting down on his survey of the area the name of the fish he had for dinner. The coming of the railroad led to development farther west from the coast. In 1906 Pompano became the southernmost settlement in newly created Palm Beach County. That year, the Hillsboro Lighthouse was completed on the beach. 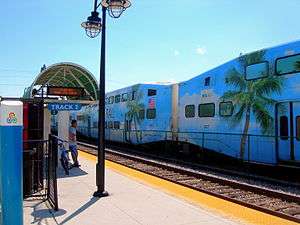 Pompano Beach is a Tri-Rail commuter rail station in Pompano Beach, Florida. With 109,000 passengers in the first six months of 2011, it is the 10th busiest Tri-Rail station.

The Pompano Beach station is located at Northwest Eighth Avenue and 35th Street, just southeast of the intersection of West Sample Road (SR 834) and Military Trail (SR 809). The station, officially opened to service January 9, 1989, offers parking. Pompano Beach is the last station not to be renovated to include better platform roofs, elevators and a pedestrian bridge over the tracks like most stations underwent.

In 2011, Tri-Rail received a $5.7 million grant to renovate Pompano Beach as an environmentally sustainable station, collecting more than 100% of its energy demand through solar power, with the excess to be put on the grid. Construction was to have started in spring 2012 and finished by May 2013 but the project fell through. In December 2014 Tri-Rail's governing board awarded a $40 million contract to Gulf Building to build a new headquarters, parking garage and station on the site of the Pompano Beach stop and on April 17, 2015 the South Florida Sun-Sentinel reported that groundbreaking was to take place later in the month. The upgrades are scheduled for completion in summer 2016

Newsday 11 Nov 2022
Jorge Tigre, 18, of Bellport; Justin Llivicura, 16, of East Patchogue; Michael Lopez, 20, of Brentwood; and Lopez's cousin, Jefferson Villalobos, 18, of Pompano Beach, Florida. MS-13 had believed based on social media posts that the sole survivor of the attack and his friends ...
Edit

Speeding Florida pol Beverly Perkins under fire after telling cop to ‘find something better to ...

MS-13 trial: Prosecution says defendant was the 'bait' and 'mastermind' in quadruple killings

Newsday 11 Apr 2022
The victims were Jorge Tigre, 18 of Bellport; Justin Llivicura, 16, of East Patchogue; Michael Lopez, 20, of Brentwood; and Lopez's cousin, Jefferson Villalobos, 18, who was visiting from Pompano Beach, Florida. The gang had believed based on social media posts that the ...
Edit

The Call 22 Oct 2020
Pompano Beach, FL – June 27, 2022 – In a website post, The Original Frameless Shower Doors answered one of the most frequently asked customer questions, “what are the options when choosing a frameless shower door Pompano Beach?” The company mentioned that when revolutionizing a ...
Edit

One Up Services – An Innovative Business Model for a Modern Lifestyle

The Call 22 Oct 2020
Pompano Beach, FL - August 26, 2022 -- In these post-pandemic times, we’ve learned, as a society, that working smarter means utilizing resources at hand to increase our avenues of income. As brick-and-mortar businesses took the largest hit most have seen in their lifetime, online purchases reached an all-time high ... It's not even a sale ... -Scott D ... .
Edit

What do those developments' names really mean?

The Salem News 23 Feb 2022
Developers in Pompano Beach and Boynton Beach chose the name to market a specific lifestyle to a post-war generation of retirees — with prices at the Pompano site starting at $8,995, according to a 1967 Fort Lauderdale News and Sun-Sentinel ad ... —Golfview Harbour in Boynton Beach has "no golf, no view, and no harbor," said Christine Tagle Reed.
Edit

Why do real estate developments have such silly names?

Lima Ohio 19 Feb 2022
Developers in Pompano Beach and Boynton Beach chose the name to market a specific lifestyle to a post-war generation of retirees — with prices at the Pompano site starting at $8,995, according to a 1967 Fort Lauderdale News and Sun-Sentinel ad ... Beach, Broadmoor and Doral.
Edit

Why do real estate developments have such silly names? An exploration of South Florida’s most baffling

Finger Lakes Times 17 Feb 2022
Developers in Pompano Beach and Boynton Beach chose the name to market a specific lifestyle to a post-war generation of retirees — with prices at the Pompano site starting at $8,995, according to a 1967 Fort Lauderdale News and Sun-Sentinel ad ... —Golfview Harbour in Boynton Beach has “no golf, no view, and no harbor,” said Christine Tagle Reed.
Edit

The Times of India 02 Jan 2022
The Broward Sheriff's Office said Black was taken into custody in Pompano Beach early Saturday morning, according to the South Florida SunSentinel, reports ... Pompano Beach is Black's hometown ... Kapri, posted bond and was released.
Edit

NME 02 Jan 2022
The rapper, whose real name is Bill Kapri, was taken into custody in Pompano Beach but has since posted bail and been released ... CREDIT ... Kapri discussed the pardon from Trump in a song called ‘Last Day In’, which was released immediately after he was released from prison, while he shared his post-prison lifestyle in another track a month later ... .
Edit

Kodak Black Accused Of Having Sex At NHL Hockey Game

Vibe Magazine 01 Jan 2022
View this post on Instagram ... Kodak, a native of Pompano Beach, Florida, was at the game to support his favorite NHL team, the Florida Panthers, in their matchup against the Vancouver Canucks on Tuesday night (Jan ... On January 1, 2022, he was arrested for trespassing in his hometown of Pompano Beach, Florida in the wee hours of the morning.
Edit

110,000 Affected by Epik Breach - Including Those Who Trusted Epik to Hide Their Identity

Slashdot 26 Sep 2021
Today the Washington Post describes a real estate agent in Pompano Beach who urged buyers on Facebook to move to "the most beautiful State." ... The brokerage's owner told the Post they didn't "want to be involved with anyone with thoughts or motives like that." ... Earlier in the week, the Post reported.